Under the leadership of Grand Master Clark, the idea of a Grand Masonic Temple was conceived and begun in 1902.  The cornerstone was laid the same year, but the building was not completed until 1912.  The first meeting was held in the building in 1909.  The building was damaged by fire in May of 1954.  Remodeling begun in the fall of 1954 and was completed in 1955. The building is located on the corner of 4th and State Street (119 West 4th Ave) in Pine Bluff.  It served as the meeting place for the Masons and Order of the Eastern Star and other Masonic houses until 2005. 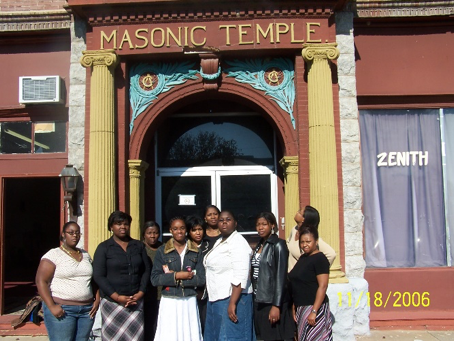 In 1952, under the leadership of Grand Matron Gilliam, the Grand Chapter purchased the Dubisson Building for the fee of $25,000.00.  The purchase stood as a bulwark against depression and old age.  The Dubisson building was located at 905.5 Gaines Street in Little Rock.  The OES office moved from the home of Grand Secretary Henrietta L. Porter to the new building in 1955. The building also housed the Dubisson Undertaking Company.

August 1962, the Royal Grand Chapter empowered the executive board to sell the Dubissson building to the Little Rock Housing Authority and to purchase two lots on the corner of Wright Avenue and Marshall Streets to erect a new Order of the Eastern Star building; a two-story brick structure to house the OES, a mortuary, and other offices. The land was purchased, but the building never constructed.  Later, (1965-66) the two lots were sold to the Dubisson Company for the original purchased fee.  As one sale occurs, the Grand Chapter is looking to purchase property on Izard Street in Little Rock to build an office for the OES and shop rental space.

In 1966, the land purchase on 1403 Izard Street was complete and the building process began.  The building would contain OES office space and space to rent for shops and offices. Although, the hopes were that the building would be ready for the August 1967 Grand Chapter session; it was not.  The cornerstone was laid in 1968. 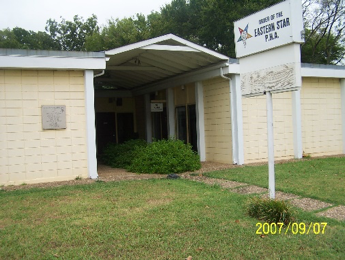 Due to safety factors, the membership was instructed by the fire and safety department not to meet in the Masonic Temple building in large assemblies.  The street level rooms could continue to be used for small meetings, and the second level for office space. Thus on December 2005, the present Grand Master Cleveland K. Wilson shared his vision and led the Masonic brothers and sisters into a joint adventure of  purchasing of the old Lowe’s building at 2906 East Harding Avenue in Pine Bluff, Arkansas for our new Temple. Winnie Ruth Johnson is serving as Grand Matron during this joint adventure.

In August 2006, the building was acquired and renovations began. On February 22-24, 2007, the Grand Lodge and Grand Chapter held their annual sessions in the new building.

The theme:  “A New Beginning” was fitting for the occasion.

Thus, on September 29, 2007, the building dedication, cornerstone lying, and dedication banquet will all occur.  With this celebration, the “New Beginning” ends and it now becomes a period with a theme of “Re-Dedication.”

Financing of this building continues to be from pledges, assessments, special fundraisers, and bingo. 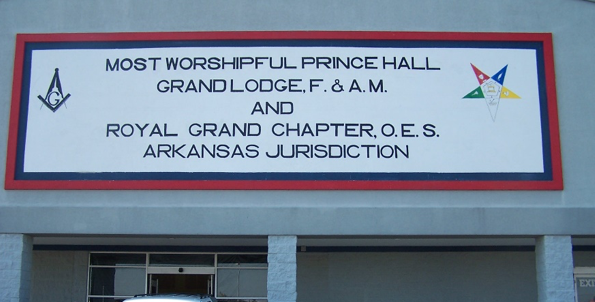